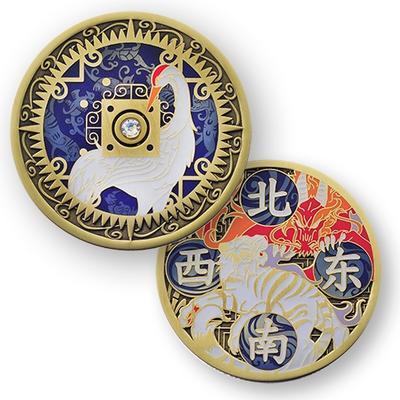 The Han Cosmic Mirror represents many aspects of life for the Chinese culture of long ago. However, to this day, it is still shrouded in mystery and its precise use is still unknown. One thing is for sure: the mirror was cosmologically significant. It was mass produced during the years of 206 BCE to 220 CE. These mirrors are also referred to as TLV mirrors by westerners because of the T, L , and V shapes in the design work, but not all mirrors incorporated all of these shapes.

The design:
The outer ring symbolizes the clouds of the round heaven, and the square in the center signifies the Earth as the Chinese believed the earth was square during this time. However, it is also believed that the square represents China as the "Middle Kingdom." Another diagnosis of the square center is related to the Gui Sundial. This sundial is divided into 100 parts and is the earliest known sundial in the world. The sundial is thought to provide time or direction. The area between the square the heavens represents the Four Seas. Four Seas was a term not meant for water, but rather a representation of the four territories outside of China. The four "T" shapes around the square showed the four gates into the middle kingdom. The "V" shapes at the corners are thought to give compass directions. Overall the mirror is believed to show the five directions of North, South, West, East, and Center.

Also being regarded as a compass, the Cosmic Mirror was not only thought of for physical direction use, but also for finding a direction in life. The mirror was believed to expel unpromising effects on daily life and to determine which days were going to be good days.

Dragons and Tigers are depicted on most Cosmic Mirrors. Dragons were an important symbol and signify strength, goodness and spirit of change. Maltese Tigers were revered in China and reported to live in the Fujian Province. Both figures are located on the outskirts of the Four Seas roving among the four quarters. Direction of the compass is believed to be ruled by creatures: white tiger for West, tortoise for North, vermilion bird for South, and dragon for East. The crane is a symbol of longevity and is able to fly souls to heaven.

The 2014 Compass Rose Geocoin is made in five different versions:

Specification Write Product Review
Write a review. No review available for this item.
Product 42 / 76
Back to Overview
Previous Product | Next Product